The Feminine Mystique After 50 Years, A Woman's Rights Timeline by Mary Greenwood

Betty Friedan’s book, The Feminine Mystique, was published in 1963. The first chapter is called, The Problem That Has No Name, and starts with this paragraph: “The problem lay buried, unspoken for many years in the minds of American women. It was a strange stirring, a sense of dissatisfaction, a yearning that women suffered in the middle of the twentieth century in the United States. Each suburban wife struggled with it alone. As she made the beds, shopped for groceries, matched slipcover material, ate peanut butter sandwiches with her children, chauffeured Cub Scouts and Brownies, lay beside her husband at night--she was afraid to ask even of herself the silent question--’Is this all?’ “ All over the country women were asking whether this all there was for women’s opportunities. Friedan’s helped start the women’s movement in the 1960’s along with other feminists such as Gloria Steinhem and Bella Abzug.

The Feminine Mystique was required reading at my college, but it took awhile to realize that women did not have many rights at that time. Women could not have their own credit or credit cards, the help-wanted ads were for men or for women, and women were not welcome in the workplace. Later in law school and then as an attorney, I saw first hand what needed to be done in the workplace, in the courts, in Congress and in the stereotypes of society.

These rights came slowly, one by one. I decided to do a timeline to show some of the barriers being broken by women over the last 50 years.

1962:  Ivy League Schools like Yale, Princeton and Dartmouth were closed to women.

1963. The Feminine Mystique was published, the Equal Pay Act passed and Lesley Gore sang, “You don’t own me!”

1964. Title VII of The Civil Rights Act was passed, which prohibited race, national origin, religion and sex discrimination
in employment. The federal government made clear, it did not intend to enforce the sex discrimination provisions.

1965. The Supreme Court established the right to privacy when it overturned Connecticut’s law banning contraceptives.

1966. The National Organization for Women was formed. Betty Friedan was President.

1967. Muriel Siebert was first woman to own a seat on the New York Stock Exchange.

1970. Diane Crump was first woman jockey in the Kentucky Derby.

1973. Billie Jean King beat Bobby Riggs in The Battle of the Sexes in tennis.

1974. The Equal Credit Opportunity Act allowed women to get their own credit cards.

1976. The Supreme Court struck down the requirement for written spousal consent in order for a a woman to obtain an abortion.

1977. The National Women’s Conference was held in Houston (I was a delegate from South Carolina.) Women were
admitted as cadets in US Service Academies.

1979. The first Susan B. Anthony coins were minted.

1980. The Supreme Court struck down a law that denied a widower’s workers compensation claim unless he could
prove dependency.

1982. The ERA was not ratified. It needed three more states to pass, but Connecticut passed it.

1984.The Supreme Court held that the Jaycess can’t exclude women. Geraldine Ferraro was first woman to run for Vice-President.

1985. Wilma Mankiller was first woman Chief of the Cherokee Nation of Oklahoma.

1987. National Girls and and Women in Sports Day was started.

1993. Janet Reno was the first woman Attorney General. Ruth Bader Ginsburg was the second woman on the Supreme
Court.

1994. Shannon Faulkner was the first woman admitted to the Citadel. When it was discovered she was a woman, it
rescinded the offer. She sued and won but left after first week of classes.

1996  Women first surpassed men in number of Bachelors Degrees earned in US.

1997. Madeline Albright was the first woman Secretary of State.

2002  Linda Sanchez and Loretta Sanchez were first sisters to both serve in Congress.

2004. Ireland President Mary McAllese assumed the Irish presidency from another
woman, Mary Robinson, and she was reelected in 2004.

2006. Betty Friedan dies. Janet Gurthrie is inducted into the International Motorsport
Hall of Fame as the first woman to compete in the Indy 500.

2007. Nancy Pelosi was elected first woman Speaker of the House.

2008. Hilary Clinton becomes the first woman to win a US presidential primary.

2013. Announcement that women in US will be allowed to serve in combat.

As that old Virginia Slims ad stated, “We have come a long way, baby!” However, in the next fifty years, we still have a long way to go.

Mary Greenwood, Mediator, Attorney and Author of How To Negotiate LIke A Pro: 41 Rules for Resolving Disputes, Winner of nine  book awards;  How To Mediate Like A Pro: 42 Rules for Mediating Disputes Winner of twelve book awards and How to Interview Like a Pro
www.MaryGreenwood.org 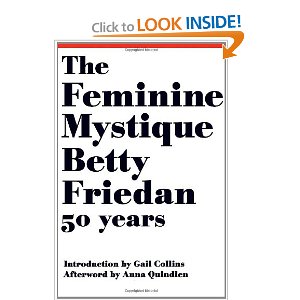 Posted by Mary Greenwood at 5:13 PM No comments: